The foal was thin with minimal body fat stores. The cranial lung lobes were bilaterally dark red, and firm. There was mild interlobular edema and collapse of the cranial lung lobes. The trachea, primary bronchi, and itra-lobular bronchi contained serous and fibrinous exudate.

The skeletal muscles were diffusely soft pale and pink.

Skeletal muscle: There is mild multifocal myocyte degeneration and necrosis. Diffusely large numbers of myocyes contain intracytoplasmic pale basophilic round inclusions which replace the sarcoplasm. Myocytes also have pale vacuoles in the cytoplasm.

Heart: Cardiac myocytes are similar to skeletal muscle. The most striking feature is the large basophilic inclusions in Purkinje fibers. 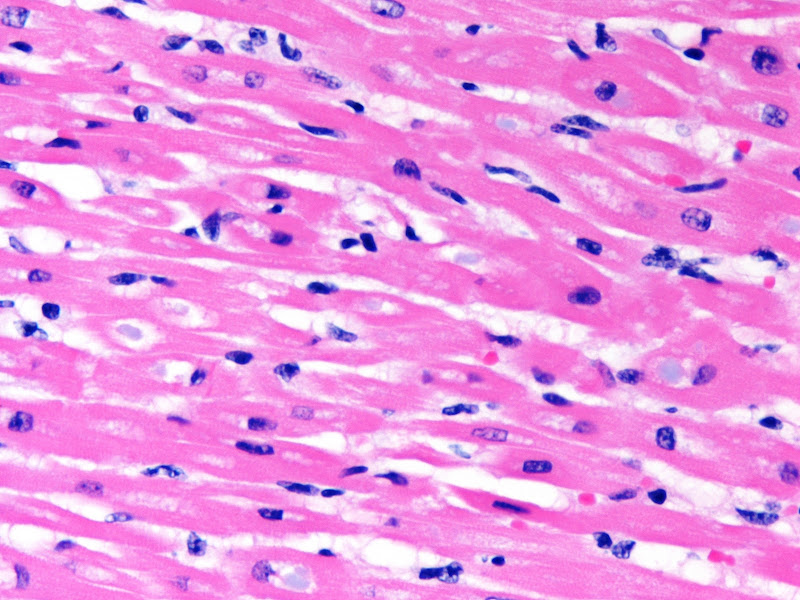 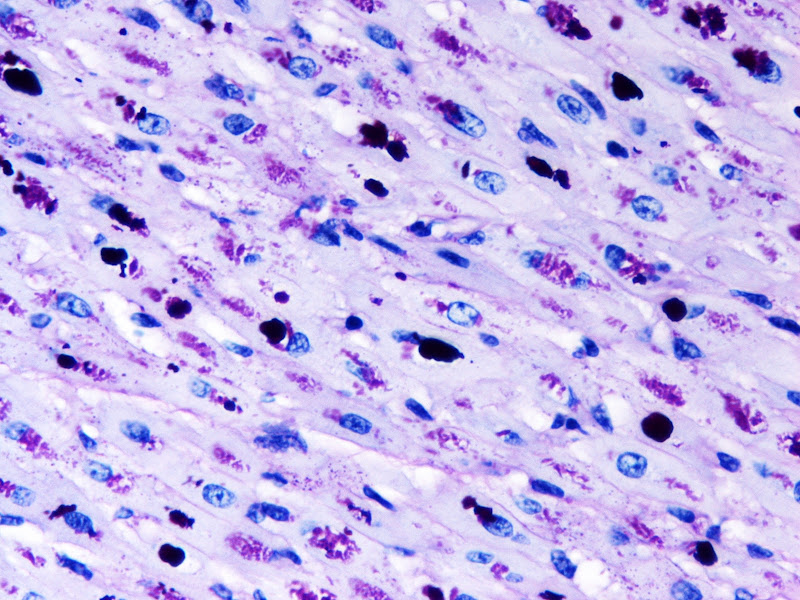 Heart, PAS/Amylase: PAS positive material (dark purple) is found as clumps of granular subtance in myocytes, and as smooth round inclusions. This is not digested with amylase indicating its not normal glycogen, rather some abnormal polysaccharide 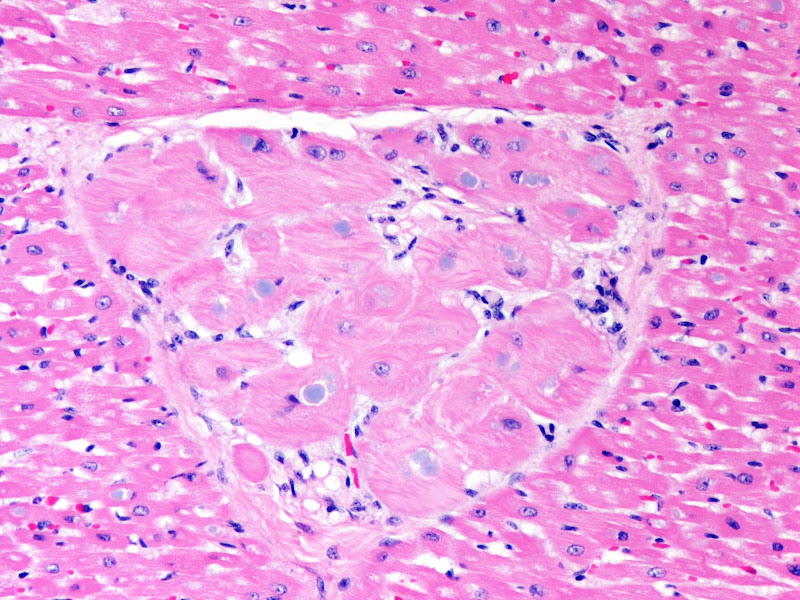 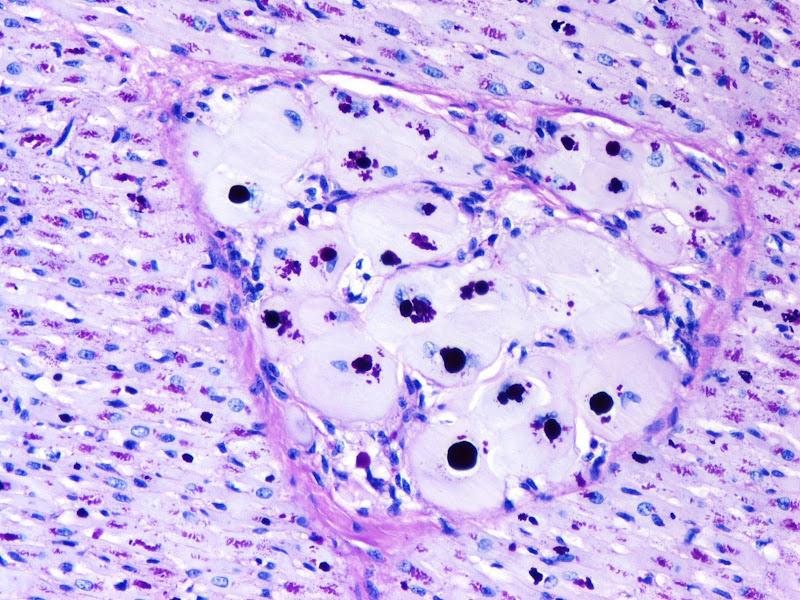 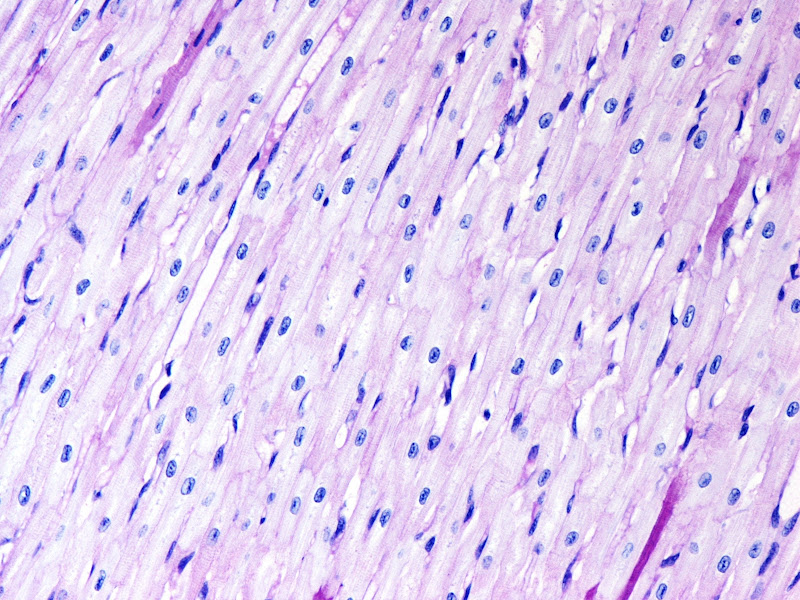 Normal Heart, PAS/amylase: Normal glycogen is digested by amylase and is not present in normal heart from a control animal 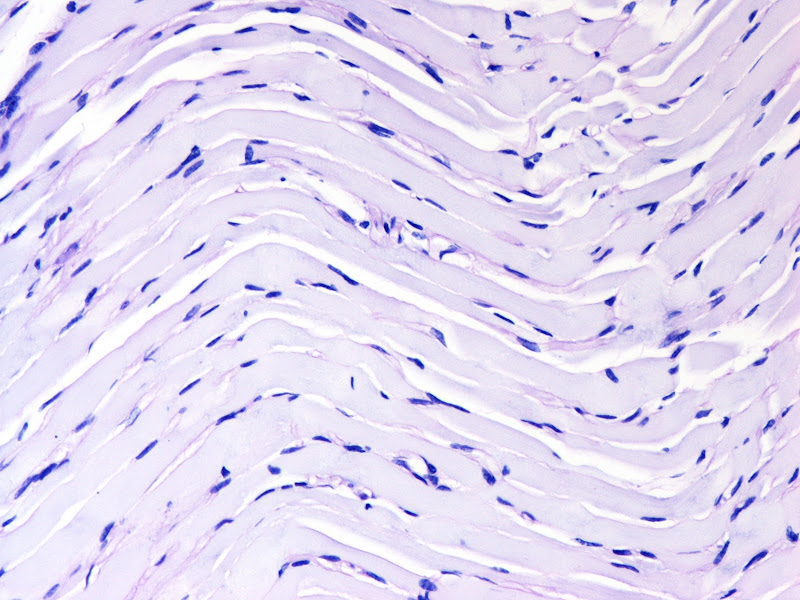 Glycogen Branching Enzyme Deficiency is an inherited defect in an enzyme that creates branches in glycogen for storage in tissues.  This disease is similar to the Type IV glycogenosis in humans (glycogen storage disease caused by a deficiency in alpha-1,4-glucan 6-glycosyl transferase). It is also similar to adult polyglucosan body disease in humans, also caused by a defect in a glycogen branching enzyme.  Organs affected with these disease include liver, CNS, PNS, and muscles.  The defect is an inherited autosomal recessive mutation in the GBE1 gene, causing a premature stop codon. This mutation results in poorly functional enzyme and therefore poorly branched glycogen, which is not capable of being transformed into glucose by debranching enzyme.

The University of California Davis and Vetgen are  licensed  to conduct testing to test a foal, mare or stallion for carrier status.  You can find more information at www.vgl.ucdavis.edu and www.vetgen.com.