There is a current strangles outbreak on the farm. The brain mass indicates strong suspicion of abscess as complication to strangles.

The carcass was in good body condition, fresh with no autolytic changes. The guttural pouches bilaterally were filled with thick, firm inspissated pus. 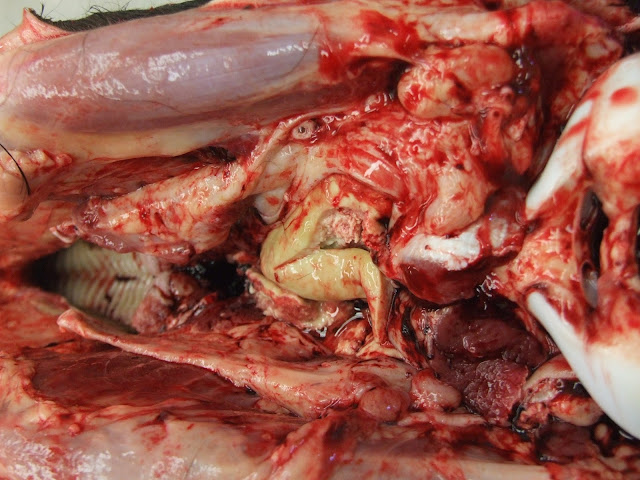 Guttural pouches, ventral view (rostral is left): in the center you can see a thick solidified pasty yellow mass extruding from the guttural pouch.

The mandibular and retropharyngeal lymph nodes were enlarged bilaterally and several were completely effaced with purulent material, and had fibrous capsules enclosing the pus. 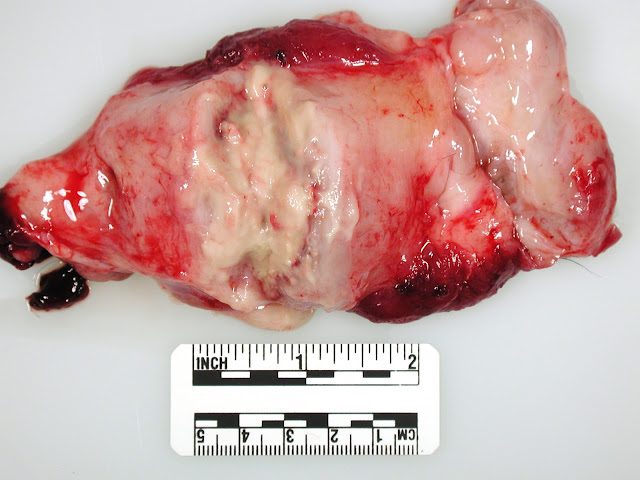 The right caudal lung lobe had a focal 2cm firm nodule elevating the pleural surface of the dorsal and medial aspect of the lung lobe. The nodule was composed of a thick fibrous capsule surrounding a 2 mm diameter central zone containing yellow purulent material. 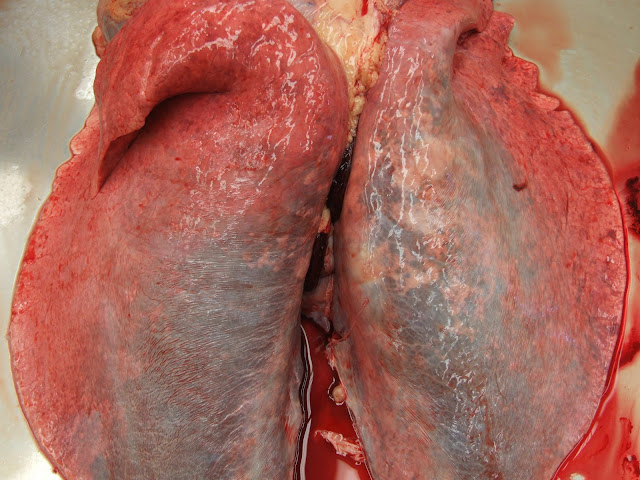 Lungs, dorsal view: The right dorsal aspect of the middle and caudal lobes have a poorly defined expanded area corresponding to a chronic abscess. Rhodococcus equi was cultured. 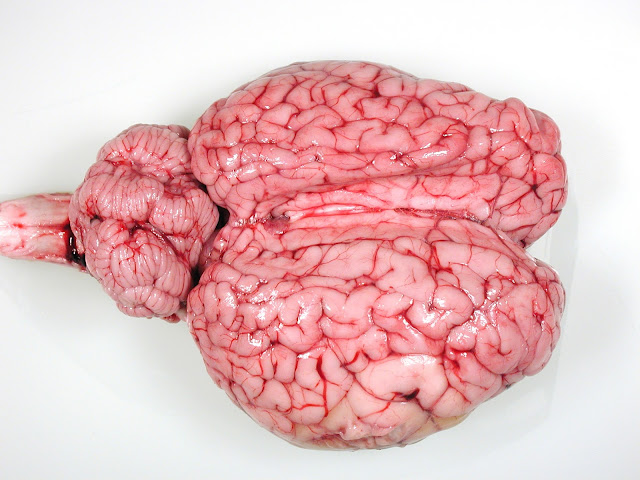 Brain, dorsal view: The right cerebrum is expanded and fluctuant, with flattening of sulci and gyri (Abscess) 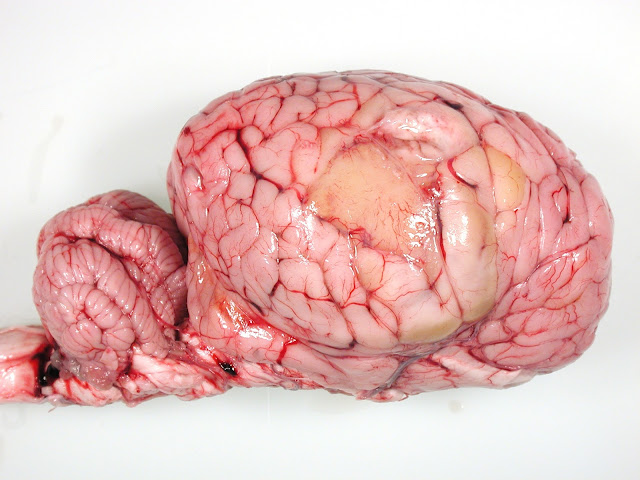 Brain lateral view: The right hemisphere is yellowed multifocally with obvious flattening of sulci and gyri 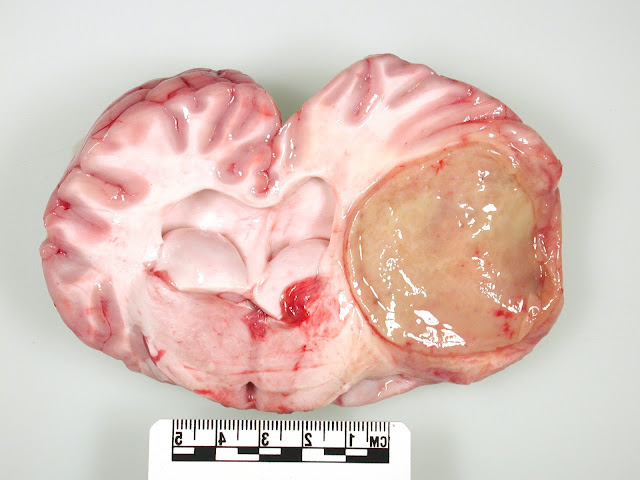 Brain, cross sectioned: THe right cerebrum is effaced by a well circumscribed abscess filled with pasty purulent material (asbcess). cerebral grey matter and white matter tracts are effaced, and the lateral ventricles are mildly dilated. There is deviation of the midbrain to the left. 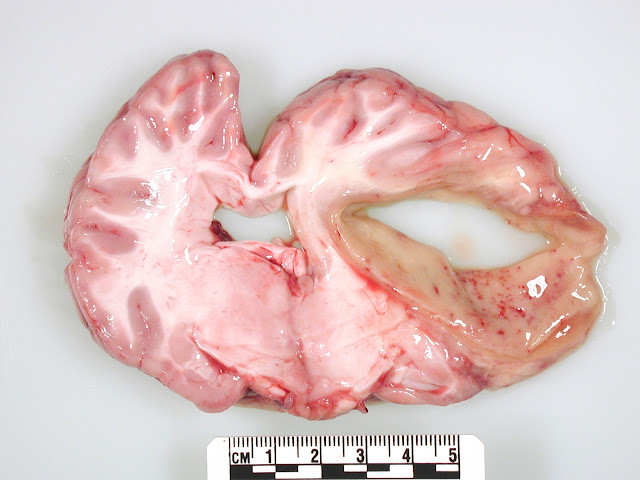 Brain, cross section with pus removed. The rim of the abscess is composed of some yellow tissue corresponding to suppurative infiltrate and astrocyte proliferation histologically. The red areas are neovascularization in response to the inflammation. 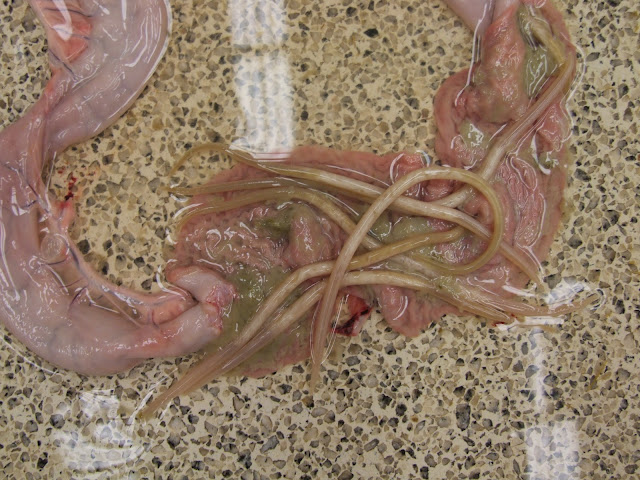 The non-glandular gastric mucos had multifocal to coalescing ulcers. 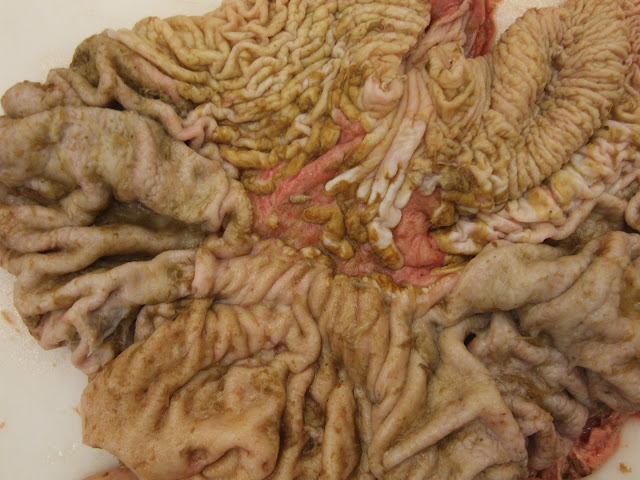 Stomach: Non-glandular portion is on top, and at the Margo plicatus, and extending upward are multiple coalescing areas of ulceration. Presumably stress related.

Other complications of Streptococcus equi infections include Purpura hemorrhagica, which is a Type III hypersensitivity to certain anitgens related to this bacteria. This conditions requires a first infection that sensitizes the horse to the bacteria, and then when re0infection happens antigens released systemically form complexes with circulating antibodies that lodge in small vessels, activate complement, recruit neutrophils, and cause a leukocytoclastic vasculitis with petechial hemorrhage and edema. Hemorrhages may only be visible in the gingival mucosa. Edema can be seen in the head, neck, and chest.

1 Response to Cerebral abscess in a foal- Streptococcus equi