History: a 15 month old Angus steer went down acutely and was euthanized.

Brain: In the gray and white matter of the caudal cerebrum, midbrain, and cerebellar peduncle there are multifocal perivascular infiltrates of lymphocytes and fewer neutrophils. There are randomly scattered multifocal areas of necrosis with moderate numbers of neutrophils, lymphocytes, macrophages, microglia and astrocytes (microabscesses). There is a single arteriole with a predominantly eosinophilic infiltrate with fewer lymphocytes.

Brainstem:  There are bilaterally symmetric focal areas of severe necrosis with large numbers of macrophages, neutrophils, lymphocytes, and a few multinucleated giant cells. The meninges are multifocally thickened with moderate numbers of lymphocytes and macrophages. Within areas of necrosis are large expanses of spongiosis with myelin sheath swelling, axonal spheroid formation and digestion chambers with Gitter cells (foamy macrophages). 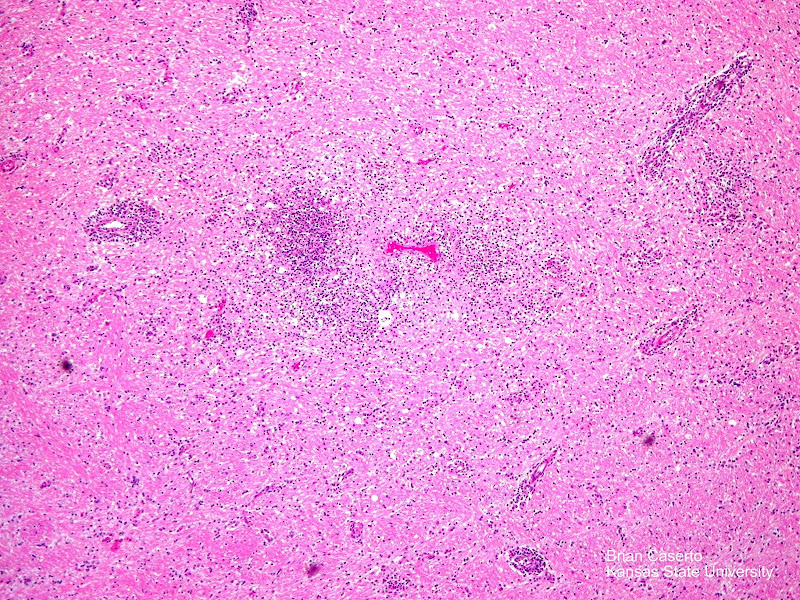 Brain: At low power there are multifocal areas of necrosis and suppurative inflammation, and perivascular cuffing 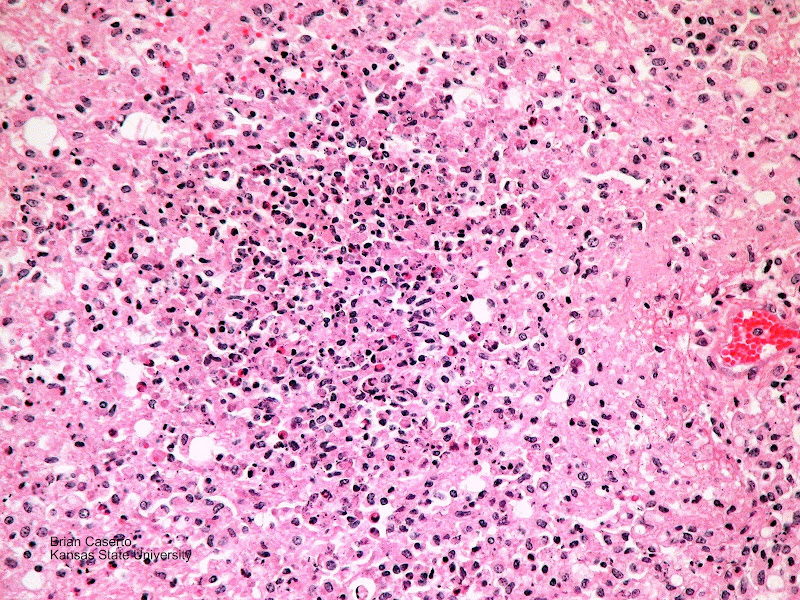 Brain: At high power the neuropil is fragmented, and neurons are not visible, instead there is cell debris and neutrophils and increased numbers of glial cells including microglia 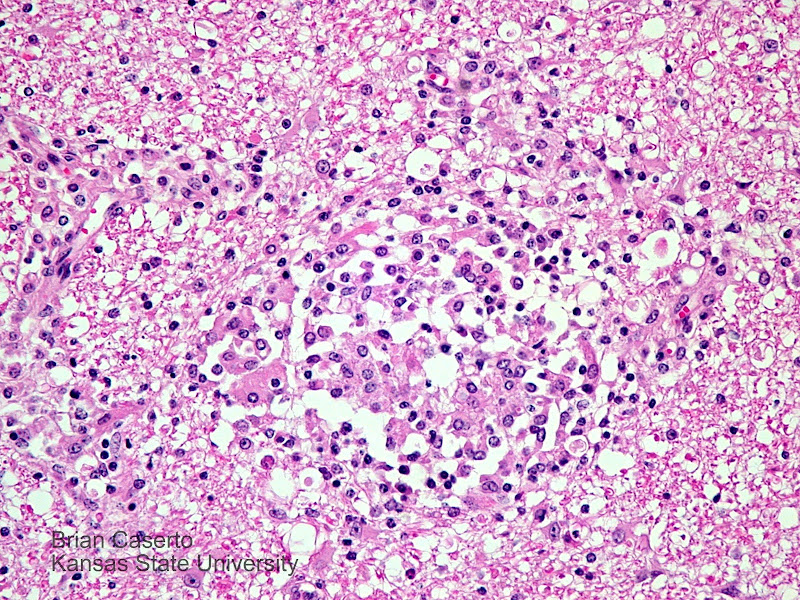 Brain: Some areas have large macrophages, or reactive astrocytes with abundant eosinophilic cytoplasm which are cleaning up and repairing the damaged neuropil 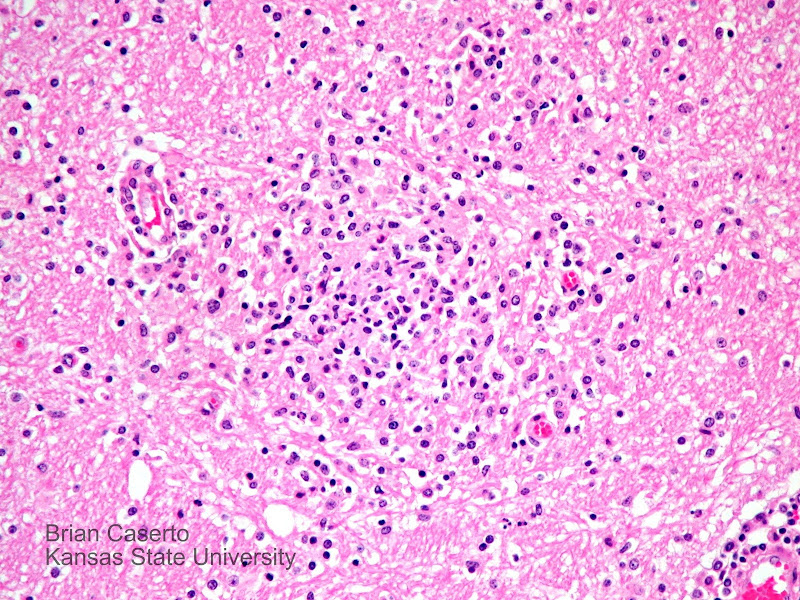 Brain: Some areas have focal gliosis, which is interpreted as a region of healing (glial scarring) 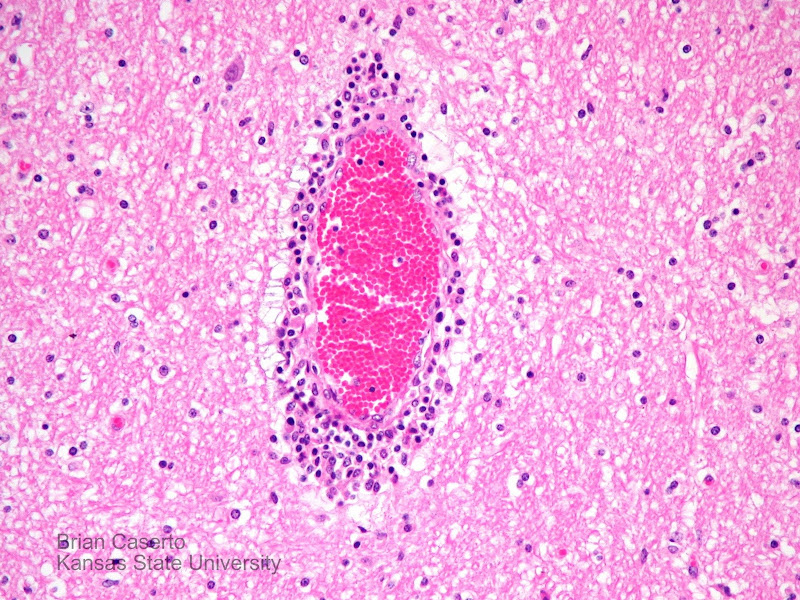 Brain: Perivascular cuffing ins prominent in some areas; cells consist of lymphocytes, macrophages and some neutrophils. 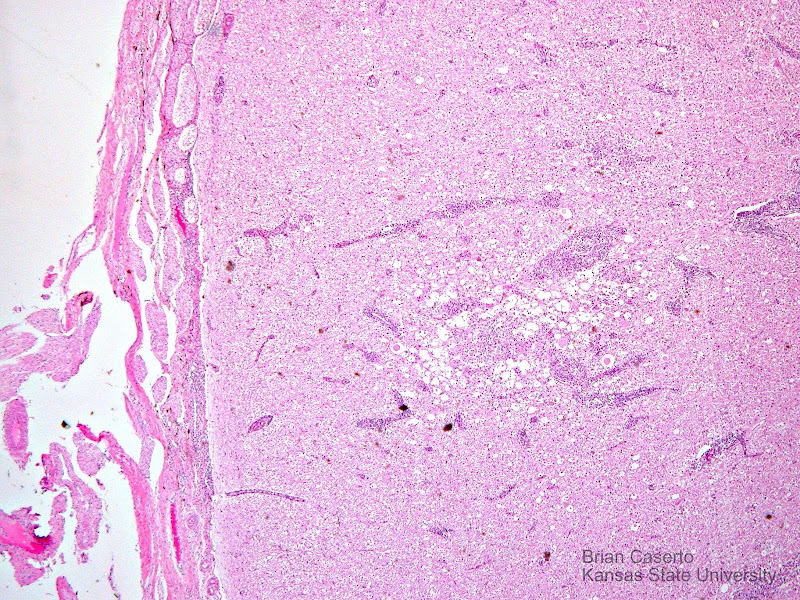 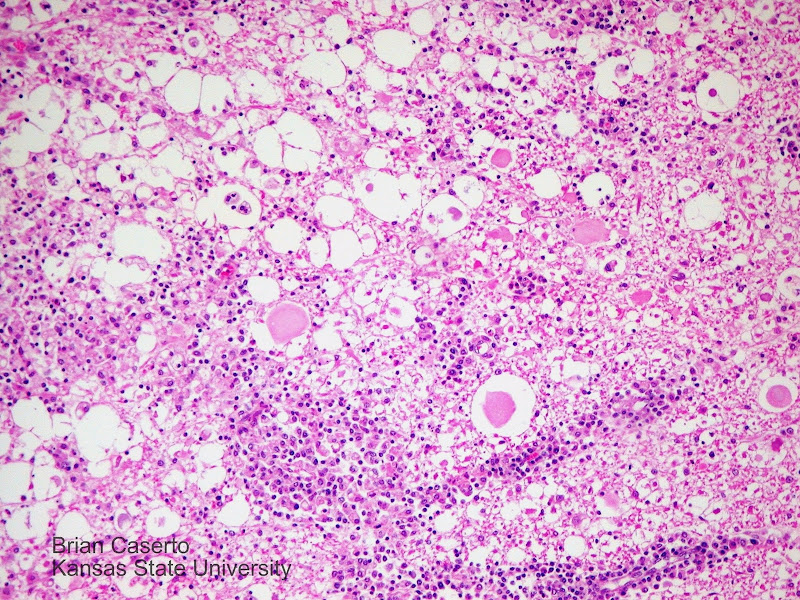 Immunostaining revealed the presence of Listeria monocytogenes in the CNS microabscesses. 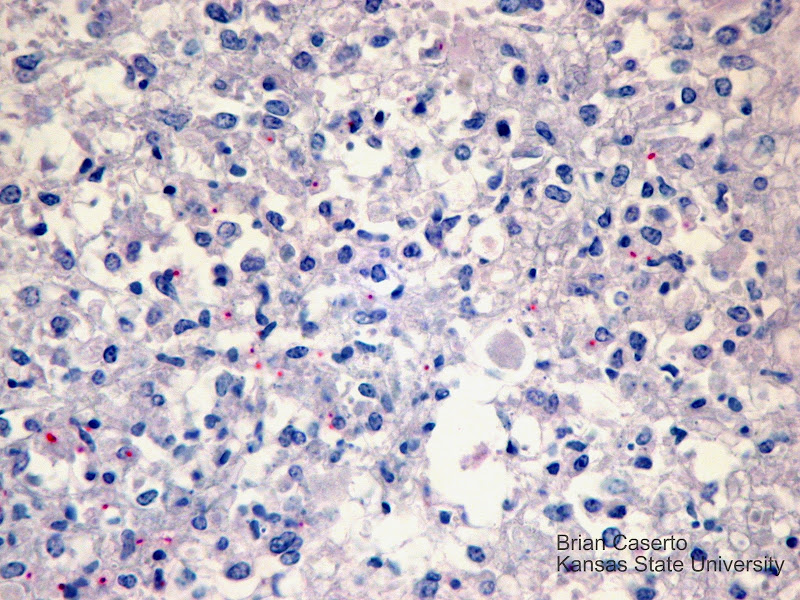 Listeria sp are Gram-positive facultative anaerobic bacilli found in the environment. It is hardy, and able to survive in temperatures ranging from 4-45 degrees C. It is an intracellular pathogen of macrophages, neutrophils,  and epithelial cells. Virulence factors include the surface protein internalin,  which internalizes with E-cadherin to overcome the intestinal, placental, and blood brain barriers. It also has a cholesterol-binding hemolysin to lyse phagosomes and escape into the cytoplasm. The organism proliferates in the host cytoplasm and migrates against the cell membrane to form protrusions that can be taken up by other cells. It can use the host cell actin filaments to help cell-cell transfer.

Disease syndromes usually dont overlap. Infection can cause abortions, septicemia, and encephalitis. Septicemia Listeriosis occurs in fetuses, neonates and young large animals up to 1 year of age resulting in generalized visceral abscesses.  Encephalitis is almost solely found in adult ruminants, and may be sporadic or associated with outbreaks.  Listeria can grow in spoiled silage that is incompletely fermented. It invades the oral mucosa and invades the trigeminal nerves traveling to the brain.  Lesions not seen in this case include vasculitis.

Of the competing differentials most can be confirmed by histopathology.

BSE: Histologic lesions include vacuolation of brainstem neurons and immunohistochemical confirmation is possible.

Urea/Ammonia toxicity: There are no characteristic histologic lesions that I am aware of. In horses ammonia toxicity causes Type II Alzheimer cells, which are a type of reactive astrocyte. This has not been described as a feature of cattle with ammonia toxicity. The alkaline rumen pH may have made this a consideration.  7.4 is pretty alkaline for the rumen, and may indicate the presence of ammonia, the by product of urea metabolism by rumen flora.

1 Response to Diagnosis- What’s your diagnosis #6