Degenerative changes in the distal metacarpus/metatarsus are commonly recognized in racehorses. Grading is based on the appearance of the surface cartilage which has limitations in evaluating the underlying subchondral and epiphyseal bone. Progressive changes in the bone density of the distal metacarpal condyles can be observed and categorized by gross examination of longitudinal sections through the midpoint of the condyles. In this series, condylar fractures occurred in lateral condyles only. Condyles from thirty-nine (42) racehorses from 2013-2014 were graded according to an established scoring system, and were additionally categorized by newly described patterns of epiphyseal sclerosis; Normal, Focal subchondral, Bridging , or Diffuse.  Eight horses with 9 lateral condylar fractures (4 left unilateral; 3 right unilateral; 1 bilateral) were found with 77.8% (7/9) of fractured condyles having Bridging epiphyseal sclerosis and 22.2% (2/9) having Focal subchondral sclerosis. No condylar fractures occurred in horses having normal epiphyseal trabecular bone density or diffuse epiphyseal sclerosis. Pre-existing pathology is often cited as a risk factor for catastrophic musculoskeletal injury in racing horses. In this series, grade of condylar arthrosis had no correlation to the pattern of subchondral sclerosis, epiphyseal bone density, or incidence of fracture.  However, gross examination of distal metacarpal/metatarsal condyles is able to  subjectively categorize the pattern of epiphyseal sclerosis, and the large proportion of bridging sclerotic condyles incurring catastrophic fractures suggests that this maladaptive change in bone density is a possible risk factor for lateral condylar fractures resulting in breakdowns in New York State Thoroughbred race horses.

Pathology involving the palmar/plantar aspect of the subchondral bone has been called a variety of names including “metacarpal arthrosis” and palmar/plantar osteochondral disease”. Whichever term is used this refers to several progressive degenerative changes occurring on the palmar apical region of the distal metacarpal/metatarsal condyles of athletic horses. This suite of changes begins with suhchondral sclerosis in a semi-circular pattern: 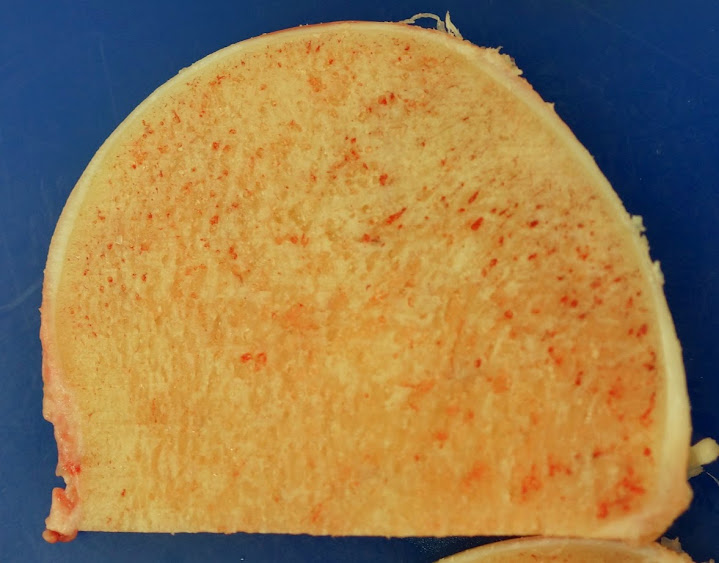 From here several things can happen:

1) The epiphysis progresses to bridging or diffuse sclerosis with no osteochondral disease: 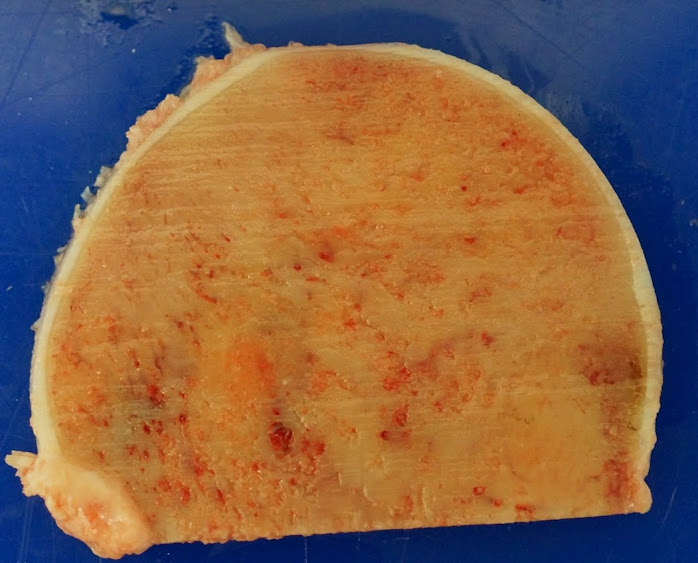 Advanced case of bridging sclerosis, nearly progressed to diffuse, but as yet no subchondral bone defect 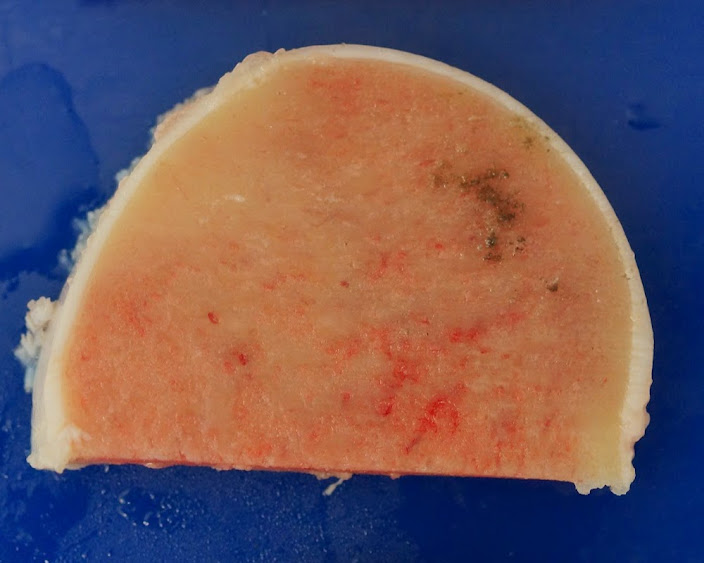 – Microcracks can form in the zone of mineralized cartilage and subchondral bone, and shrunken vascular spaces are damaged causing hemorrhage and localized hypoxia. 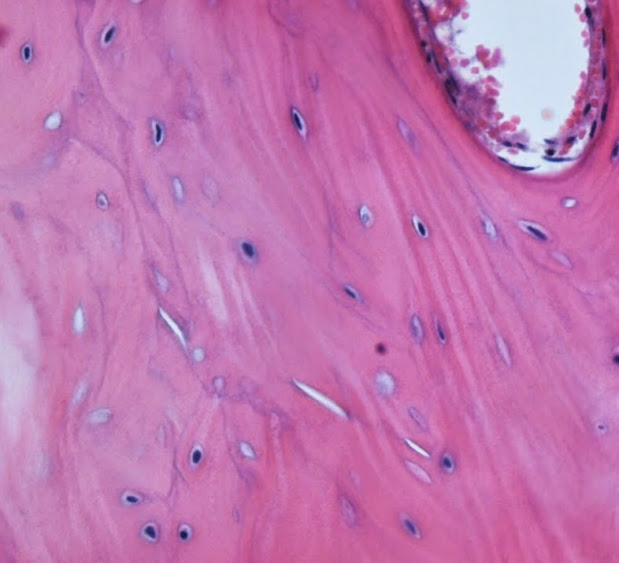 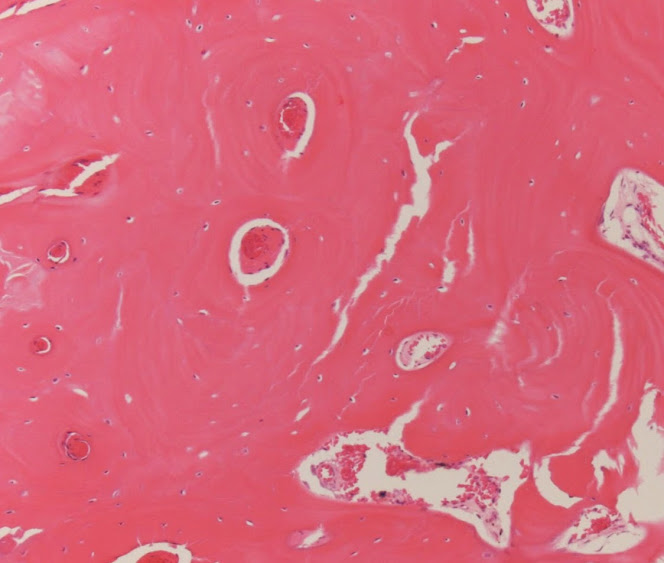 Larger cracks and fissures form as a precursor to morselization 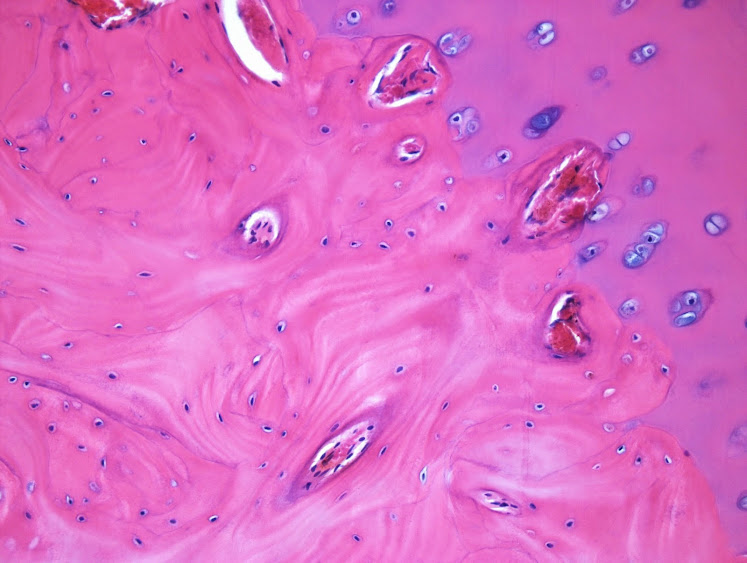 Hemorrhage within vascular spaces is an early lesion of repetitive injury

-Followed by disruption of the subchondral bone into many small pieces called “morselization” – This grossly looks yellow to brown due to hemorrhage and necrosis. 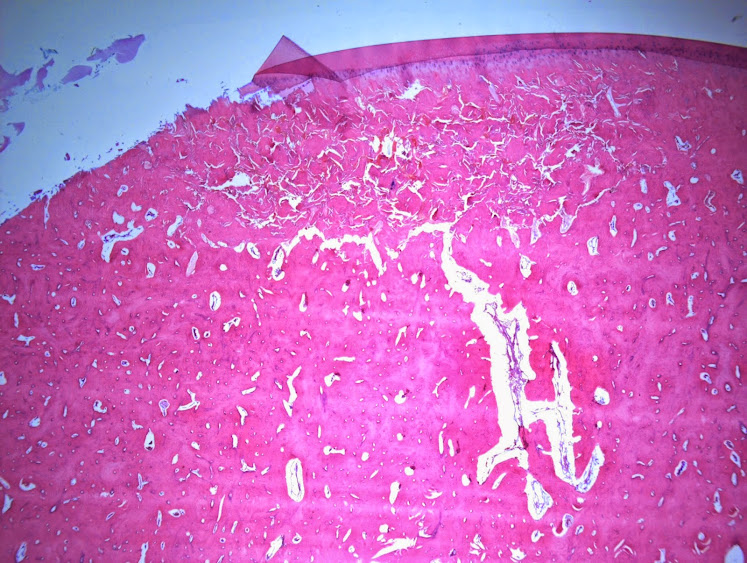 The subchodnral bone is fragmented into many small pieces by repeated impact trauma. The overlying cartilage is relatively normal.

–  This often causes a depression, flattening or defect in the overlying articular cartilage since the subhcondral bone plate is destroyed focally. 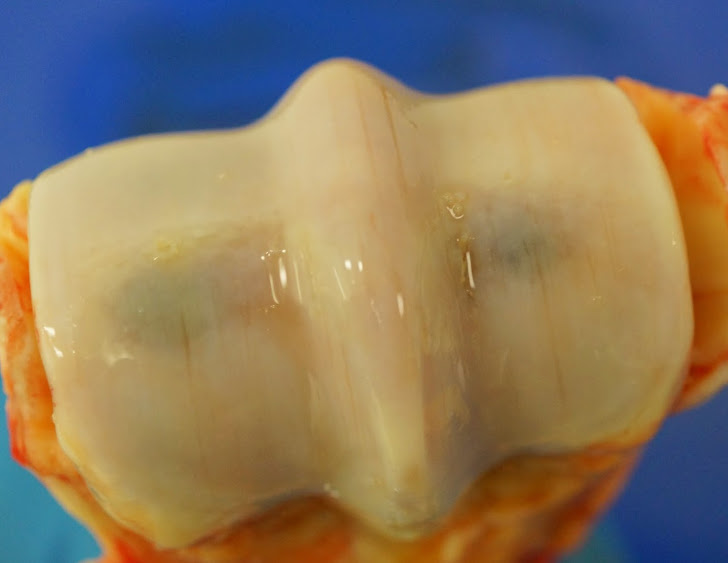 Grade 3 arthrosis/osteochondral disease in both condyles. The discoloration is due to the hemorrhage and necrosis of the underlying bone. 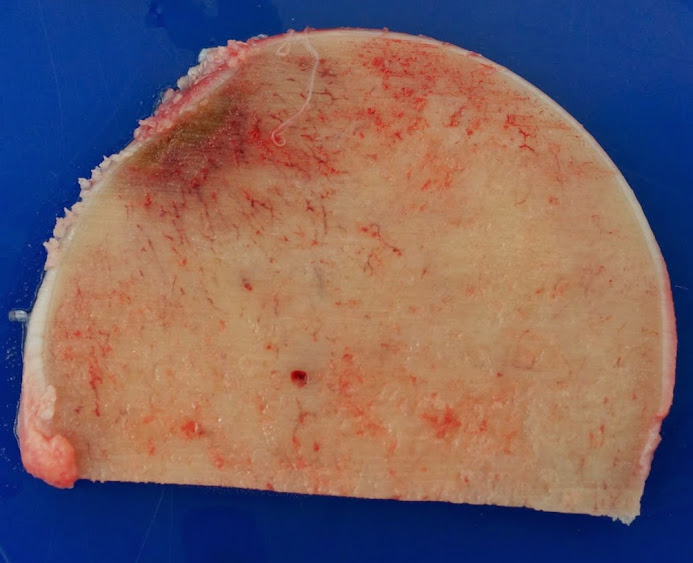 Severe subchondral necrosis (osteochondral disease) in a diffusely sclerotic epiphysis. The surface is flattened, and the bone has only begun to heal.

What Happens to these lesions over time?

– Over time these regions can become re-vascularized and begin to heal: 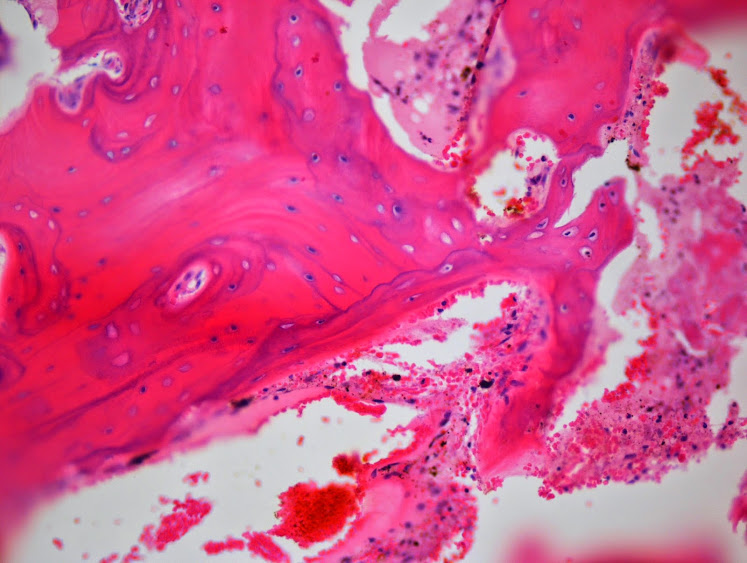 Early remodeling of moralized subchondral bone, showing reversal lines perpendicular to the lamellar bone, with woven born added to it

-Healing may take place before collapse of the articular surface, and in mild cases the surface may retain its shape and contour with no lasting effects.

-In more severe cases, the articular surface is changed permanently.

Secondary changes to the overlying cartilage include initially thickening of the cartilage, as it swells with absorbed joint fluid. This then becomes softer, and more prone to mechanical damage, and results eventually in fibrillation or a flap forming. 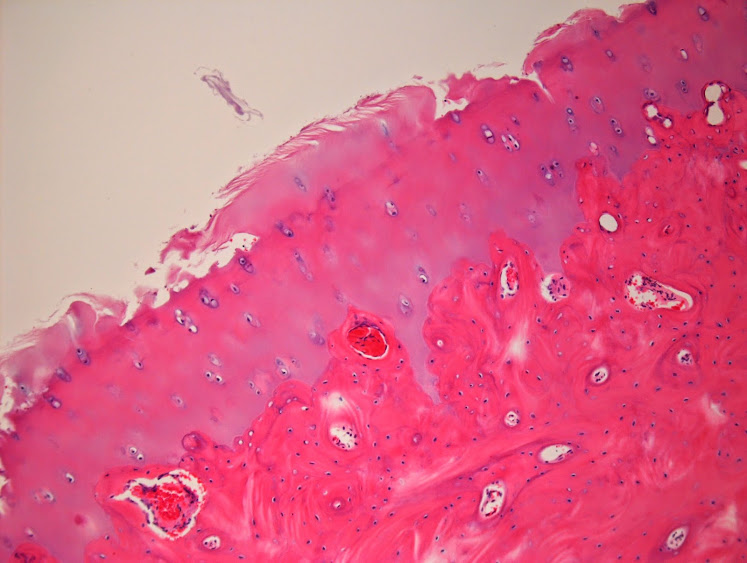 Late stage of osteochondral disease with fibrillation of the articular cartilage. Notice the subchondral bone is composed of woven osteoid indicating proliferative response and attempt at repair. In this case the contour of the surface is relatively unchanged

In some cases the cartilage collapses and dips into the subchondral bone forming a fold: 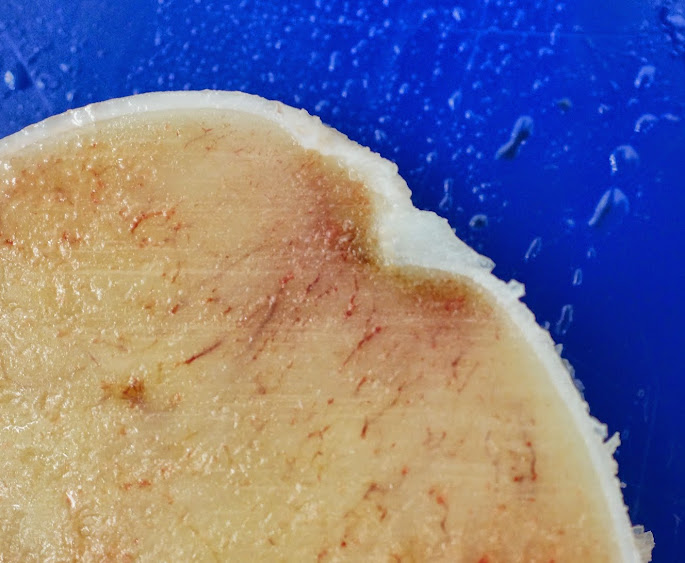 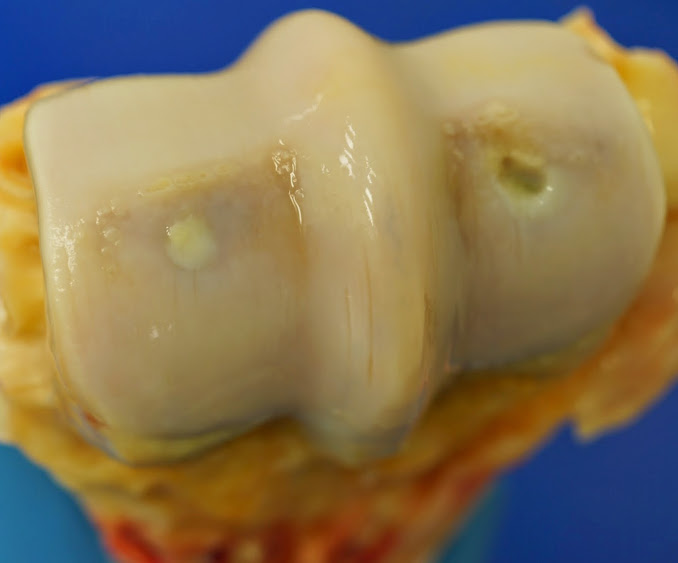 A gross image of the above lesion, an advanced case of arthrosis/osteochondral disease. On the left side there is swelling of the overlying cartilage secondary to subchondral bone changes. On the right the surface is collapse as seen in the cross section above.

Progressive degenerative joint disease is possible in the long term, however these are nearly clinically undetectable without CT or MRI, and in most cases do not affect racing performance or cause lameness.

The pathogenesis of these lesions is a subject of debate. Increased bone density is thought to lead to ischemia of the bone. However ischemic bone is still structurally sound, so by itself the reduction in vascular supply secondary to sclerosis is only a predisposing factor.

Microcracks in the zones of mineralized cartilage, and subchondral bone often occur at the periphery of the morselized regions, and in my opinion are a precursor to moreselization.  Increased bone density does lead to reduced size of vascular channels, and rigid brittle bone, which predisposes these regions for micro cracks without healing, and further moreselization that will occur.

In this case series I focused on the gross appearance of the lateral condyles. Serial longitudinal sections through lateral and medial condyles of the right and left limbs provided insights into the variety of progressive bone changes in the epiphyses of these bones. 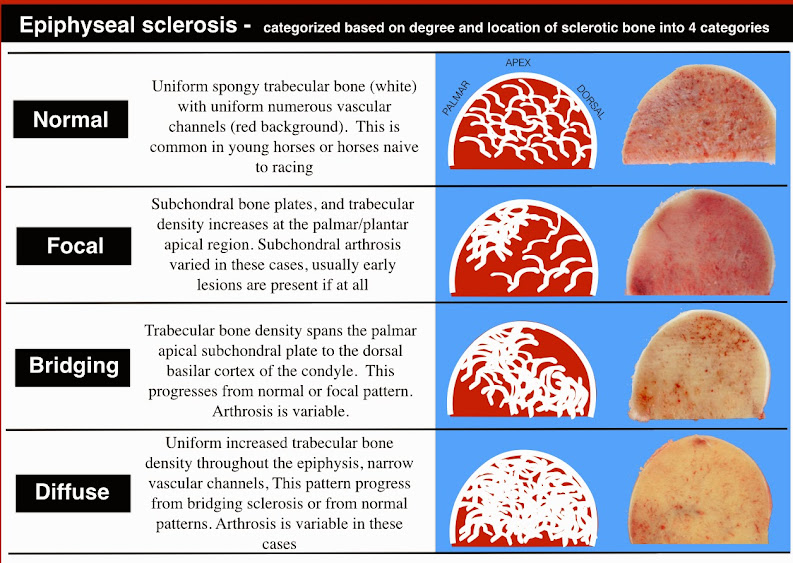 Sclerosis of the condylar epiphyseal trabeculae was grouped into 4 categories with. Osteochondral defects were not considered in these categories and were treated separately

Mechanical forces acting on the condyles influence the degree of bone density and the pattern of progression. In most horses the medial condyles are larger, wider, and progress to increased bone density faster than the lateral condyles. Undoubtedly there are conformational factors affecting the weight distribution onto the condyles that affect the forces and therefor the bone remodeling in the distal metacarpal bones.

Fractures occurred in the lateral condyles only in these horses, with roughly equal distribution between left and right forelimbs, and the right hind limbs in 3 cases.

Often the degree of density is directly related to the time in training, and not necessarily to age. Based on my observations, I can see several patterns of increased bone density. Young horses with only 1-2 years of training often have a mild increase in bone density, with the bone appearing porous throughout the epiphysis. This I categorized as “Normal”.

With more high speed training a focal region corresponding to the palmar apical area becomes sclerotic, and is distinctly less vascular, and appears as a continuous white region beneath the cartilage. This can occur with or without arthrosis. This pattern I have categorized as Focal subchondral sclerosis, or “Focal”. 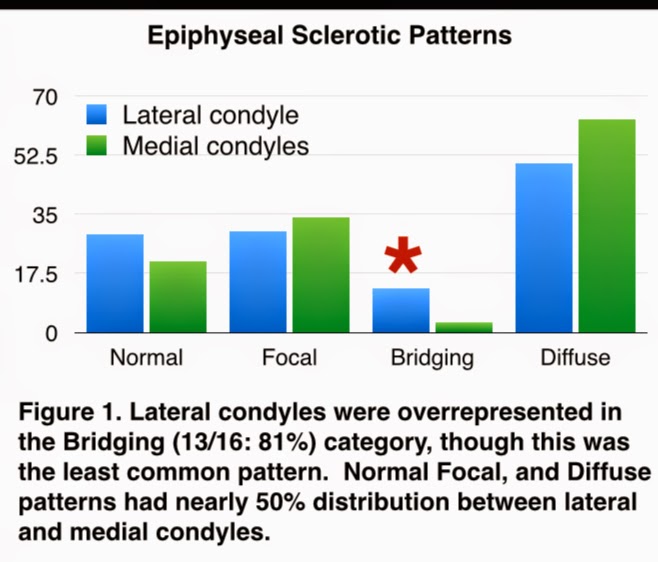 In several cases, it can be demonstrated that  with more exercise, the focal regions can extend through the epiphysis, widening and eventually bridging the opposite side of the condyle at the dorsal base of the condyle. This pattern often excludes the subchondral bone adjacent to the palmar apical crescent, and because of this I call this a “Bridging” pattern.   This pattern can eventual progress to  the next category.

The final category can arise in two ways. First, it can progress from the bridging sclerotic change. Secondly it can also develop without going through the bridging phase, and arise simply as a uniform increase in bone density throughout the epiphysis.   The reason for this I believe is simply a mechanical influence resulting from conformation and training.

Osteochondral disease and the relationship to lateral condylar fractures

All lateral condyles were graded, in the left and right limbs of each horse examined. Fractures decreased in incidence as the prevalence of each grade decreased. Most horses fell into the grade 0 category, and the least number in grade 3. 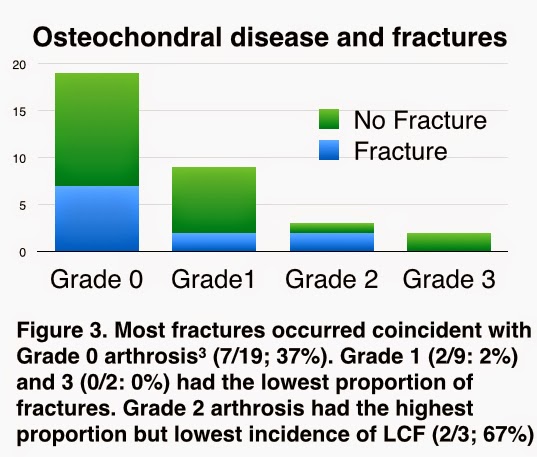 Lateral condyles were compared in both left and right limbs. The majority of these were categorized as diffuse sclerosis, having sufficiently dense bone throughout the epiphysis. The next frequent categories were focal, and normal, and these two had the least number of fractures. By far the smallest category was bridging, but it had the majority of fractures, and these outnumbered the cases of bridging sclerosis where no fracture occurred. 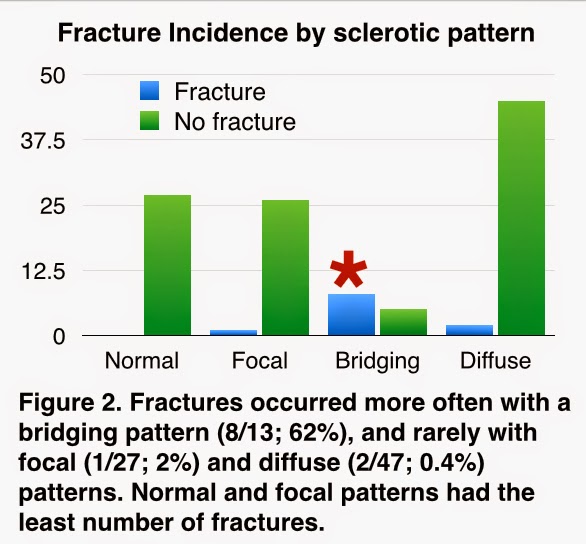 Bridging sclerosis may be a risk factor for lateral condylar fractures that could potentially be identified by CT or MRI.  Several studies, and also a poster in this conference have studied the subchondral osteochondral disease in racehorses and attempted to correlate the grade of arthrosis with incidence of fractures or breakdowns. I think the focus on these defects is not warranted based on the above results. Rather, the entire epiphysis should be examined since it seems to have a better association with lateral condylar fractures.